Today was a good day. I took my shaggy (sale) pony, and went hunting. It was an afternoon meet, as mo

st Sundays are. It was a bigger crowd than usual. Mason had guests in town, and Julie had horses rented and the usual suspects were there as well. Including me. Me who is 30Lbs overweight from my recent pregnancy.
On a (sale) pony who was 10 days back from a children’s lesson program. Good thing she’s tough.

Polka Dotti was in a lesson program at a farm down the road from last July 7, 2016 until Dec 2, 2016. She left when I was 6 months pregnant. I got her back 9-1/2weeks postpartum. 10 days later, we were hunting. I’m nuts, or I trust my pony. Hint: It’s the latter. I’m sort of a wimp these days. It was good to have her in a program. Especially one with children, but it’s not a hunting program. And though she jumped some, she was teaching a bold beginner, which isn’t the same as hopping 3′ coops or galloping through mud and hills. We did all of the above on her 1st hunt back.

The fixture we went to that day is a very jumpy fixture. USUALLY there is a second flight, and there are gates if anyone cares to get off and open them.  Not today. We headed out across the cow pasture, and the hounds struck almost immediately. With that we were off. No second flight today, we were all going to gallop. Up the hills, down the hills, through the narrow trails while the hounds worked to catch a coyote. My GPS later informed me we hit a top speed of 17.8 MPH. Not bad for a 14.1h pony.

About 15 min in, we get to our first coop. Not just the first coop of the day. My first coop since March. Dotti’s first coop since just as long. Though she did do a 2’11” stadium catch ride in May. It’s still not a coop. A big downhill coop with an ABRUPT right turn upon the landing. I’m riding in the back, so I’m last to go. We approach at a trot… I put my leg on… my eyes go down and I get sucked into the bottom of the coop. We stop. Not a rude stop. More of a “Lady I can’t do this with you all hunched over my shoulder” stop. The field is waiting. I re-approach. Eyes up! Big boot as we approach…. And we’re over!!! Holy wow that was amazing. I got a little left behind, but overall.. I DID IT!!!  What a good girl. I love this pony. We raced after that coyote over half a dozen more coops. All around three feet. Most with questionable approaches or landings.

I hunted two and a half hours that day. I say “I” because I had to hack home early. The hunt carried on. This is one of the many many trials of trying to hunt while having an 11 week old breast fed baby waiting for you at home. After a time, your breasts HURT. Which was just as well, because my face hurt too from the giant grin on my face. Thanks to an understanding hunt and a fabulous pony, I’m back. 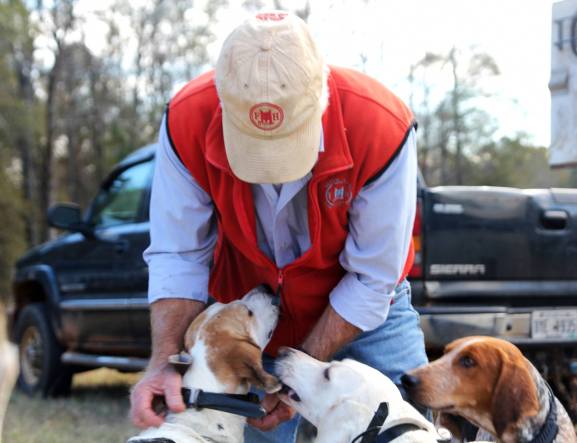 Robert Miller with hounds before the hunt. 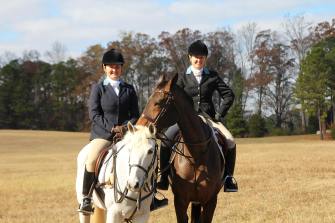